This site is offered to share my music theory research.

Musical Motives: A Theory and Method for Analyzing Shape in Music (Oxford University Press, 2021). Click here to access recordings for the examples and for further information about the book (announcements, further readings, errata, etc.)

Brent Auerbach’s Well-Tempered Clavier Project. Click here to follow my progress in recording this monumental work (and to learn more about each of the 96 pieces that comprise it!).

“Tiered Polyphony and Its Determinative Role in the Piano Music of Johannes Brahms.” Journal of Music Theory 52/2: 273-320.

“Tchaikovsky’s Triumphant Repetitions: Block Composition as a Key to Dynamic Form in the Symphonies Nos. 2 and 3.” Theory and Practice 37/38: 63-109.

When he is not at working on research or preparing for class, Dr. Auerbach can be found playing Bach at the piano, hanging at home with his family, on his bicycle tooling about Western Massachusetts, and planning upcoming vacations to the Cape and Disney. 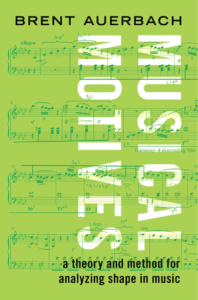